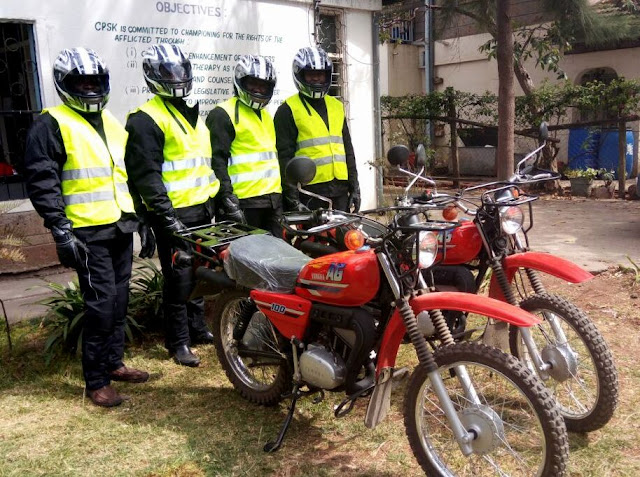 With Sponsorship from UK based organization ‘Evergreen’ CPSK has been able to expand its outreach program by being able to provide therapy services to even more youngsters. Before the motorbikes the number of children being attended to was 43, but now that the bikes are here the program can see up to 65 youngsters.
The motorbikes help in facilitating transport to the vast distances the therapist have to cover from one house to another as they strive to offer the service.
CPSK has 7 therapists, two enrolled to the program.

Achievements
·         The motorbikes have reduced time wasted in traffic
·         More youngsters have been added to the program; from 2 children to around 4-5 youngsters per therapist
·         CPSK is able to save on finances that were made to be used for transport into other programs
·         CPSK is now the leading organization when it comes to rehabilitation, with service being taken to the homes of those who need it most and cannot reach the facilities.
Posted by Cerebral Palsy Society of Kenya at 02:11 No comments: 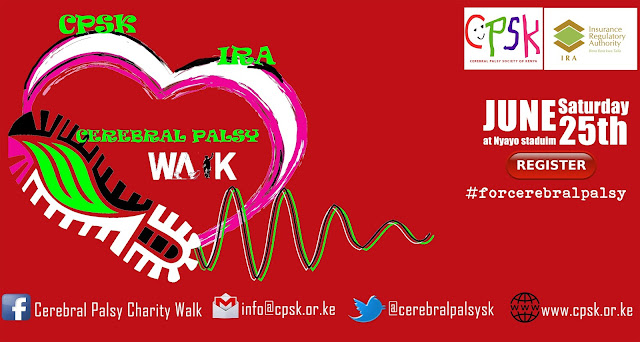 Formed in 1994 Cerebral Palsy Society of Kenya (CPSK) is a charitable organization that deals with children/persons afflicted by cerebral condition in the country. Cerebral Palsy is a developmental disability caused by brain damage before, during or after birth.

In the last four years through the sponsorship from Insurance Regulatory Authority (IRA) the society has achieved high levels of awareness about the condition and has been able to offer better rehabilitation services with the aid of other sponsors, partners and well-wishers through these walks.

This year, CPSK wants to acquire appropriate assistive devices for children and persons not only in Nairobi but also in Kitui, Kilifi, Makueni, Taita Taveta and Kiambu.

Be Part of the journey! Join us!

Saturday 25th June 2016 from 8.00am at Kuchekuche grounds (Nyayo Stadium).
You may participate as a corporate by requesting for the sponsorship categories form, as a group, family or individuals by buying a t-shirt @ 1000 kshs.
You can also support by sponsoring a Wheelchair, a child for therapy or donating in any way to the society. Your participation as an organization will go a long way in helping the society to make a difference in lives of the less fortunate. 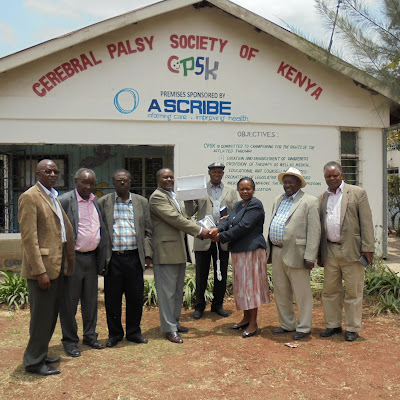 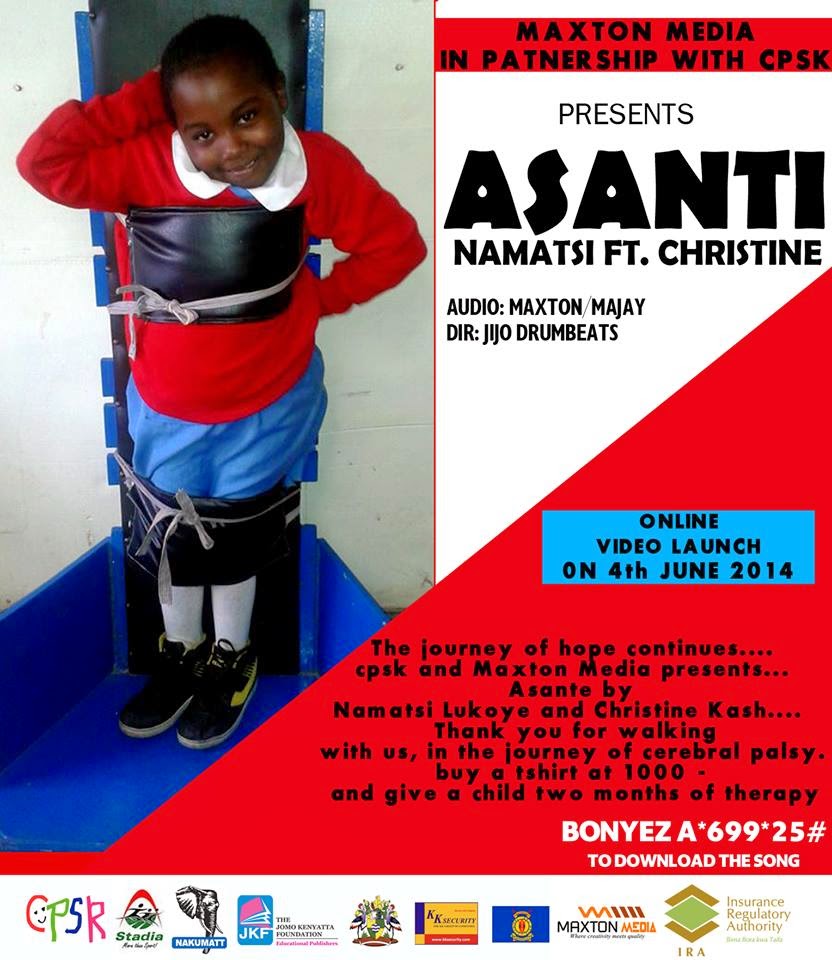 In partnership with Maxton media, musician Christine Kash and Poet Namatsi Lukoye, CPSK has been able to create awareness through the use fusion of poetry and song. Poetry being a hall mark of communication and music which relates with everyone.

The song which is a thank you song, was created to celebrate families and caregivers of children with Cerebral Palsy and also to raise funds through the music copyright society of kenya and skiza tunes. Here is the link:  Asante - Namatsi Lukoye and Christine Kash
Posted by Cerebral Palsy Society of Kenya at 00:18 12 comments:

A DOCUMENTARY ABOUT CEREBRAL PALSY AND CPSK


Posted by Cerebral Palsy Society of Kenya at 22:25 2 comments: 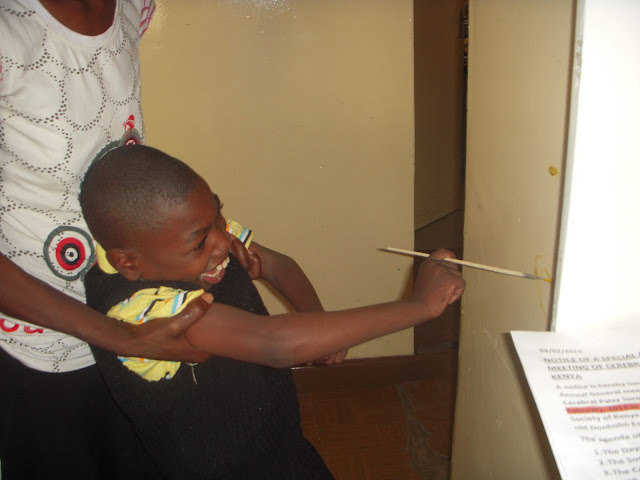 Art has a profound effect on anyone, but the benefits of exposing a child with cerebral palsy to it can be huge. This is because this artistic media is enjoyable to children and can be used to support a child’s development in a number of ways such as:- 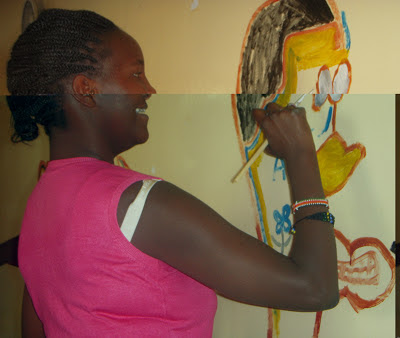 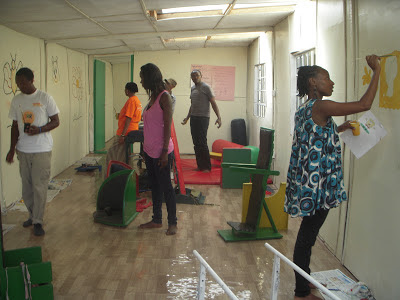 The clinic recently held a painting exercise which involved professional Artist Peter Kimwathi, as well as volunteers and friends from the community.

Posted by Cerebral Palsy Society of Kenya at 00:17 2 comments: 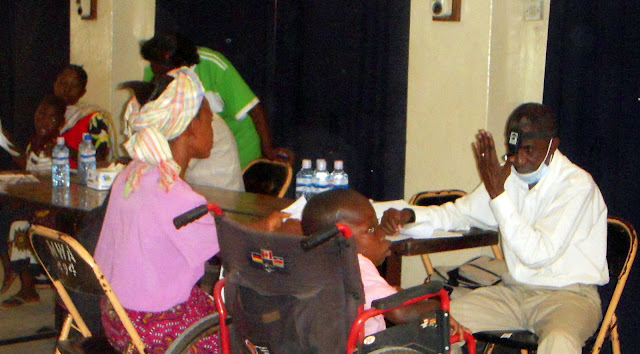 Since 2004 CPSK has held medical camps in Nairobi and one in Thika in 2010 in conjunction with pediatric doctors, orthopedics, ophthalmologists, neurologists, and dentists, ENT specialists and Nutritionists.
The medical camps are hosted to meet the following objectives
Through sponsorship from the Insurance Regulatory Authority CPSK was able to meet two of its core objectives. This was possible through the charity walk held on the 30th of June 2012 and the objectives were;

The camp was held on 20th and 21st at the Mombasa Women’s Association Hall which is situated on the southern side of the Island on your way to Likoni Ferry.

The medical personnel were able to attend to180 children on the two days. After consultations, the parents went away with prescriptions and referrals.

It was clear that most of the children screened were not getting proper medical care and therapy. This was mainly attributed to the poverty levels encountered in most areas of the coast region. Some parents expressed fear as to whether they would be able to buy the prescribed drugs and assistive devices prescribed.

According to observations many people in Coast province still associated cerebral palsy with witchcraft thus more sensitization was needed.

Children from Kizurini School had more complications than the rest; hence the need to empower parents, the school required a nutritionist and a clinical officer to monitor their progress.

Cerebral Palsy society of Kenya in efforts to strengthening and expanding its outreach program to the counties visited the school and found the condition of the children and their parents wanting.

The Kizurini Special School CP is situated in Kizurini Memorial Primary School in Kaloleni. Among the 17 special schools in kaloleni District, Kizurini special school is the only one dealing with cases of cerebral palsy. The school was started in 2007 and currently admits 35 children who are on a boarding or residential programme meaning they learn and also live in the school premises.
The aim of the school is to train children with cerebral palsy with daily living skills and general rehabilitation. Among other objectives of the school is to create awareness about special needs education in the communities in Kaloleni and to make the school suitable institution that gives quality education. Kizurini primary was picked due to its central location and easily accessible by parents. The schools proximity to St.Lukes hospital also makes it ideal for children with Cerebral Palsy.

The Facility is faced with a myriad of challenges, starting with the land scape of the school; the school has a slope and stones which is a hindrance to children’s movement due to their disability. The facility lacks ramps which makes it disability unfriendly.

Posted by Cerebral Palsy Society of Kenya at 00:05 2 comments: